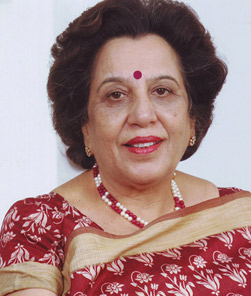 We are honoured to have Dr. Shayama Chona, one of the most accomplished educationists in the country as our Chief Mentor . The only school educator who has been awarded the Padma Shri and Padma Bhushan , by the President of India, is the driving force behind Mussoorie International School. Dr. Chona, is the Former Principal of Delhi Public School RK Puram, New Delhi – a world class institution. She has launched major initiatives to promote the teaching of Science, Computers and Information Technology in schools.

An alumna of the prestigious Maharani Gayatri Devi Girls’ Public School, Dr Chona has broken barriers to change the lives of the poor and the differently abled. She has given concrete shape to her transcendent principles by setting up three institutions under the Tamana society- ‘Tamana Special Education Centre’, ‘Skill Development Centre for Young Adults-Nai Disha’ and ‘Autism Centre-School of Hope’. As their Founder, she has been working for the upliftment of the disabled children since 1984.

She serves as a member on 97 Advisory Boards and committees, and is Trustee of the Nehru Bal Samiti and Special Olympics, Patron of ‘Concerned Action Now’, Vice Chairman of the Society for Human Development, besides being on the Managing Committee of 46 schools and other educational institutions.

She is the proud recipient of 54 awards, the most prestigious being the ‘Padma Bhushan’ in 2008 and ‘Padma Shri’ in 1999 and two National Awards in 1994 and 1997 and one State Award in 1993 for her work in the field of education and social welfare. In the sum analysis, Dr. Chona’s life may be best described as a confluence of deep and abiding compassion for all. She serves humanity with humility. Mrs. Meeta Sharma is a distinguished education leader with extensive experience, both in India and internationally. She has been with Maharaja Sawai Man Singh School, Jaipur and Mody School, Sikar, Rajasthan, an all-girls premier institute in the capacity of Head of School.

Besides the above, she has founded the International School at Karjat, Maharashtra. She has also spent several years with the Doon School, Dehradun as a facilitator of Chemistry and headed the Department of Science.

She has a post-graduate certification in education pedagogies from the Institute of Education (IOE), University College of London, UK. She is a gold medallist (Chemistry) from North- Eastern Hill University Shillong, Meghalaya. She received formative education in Canberra, Australia. In addition to these, she is a member of the National Training panel for the International Award for Young People (IAYP) formerly called the Duke of Edinburgh award.